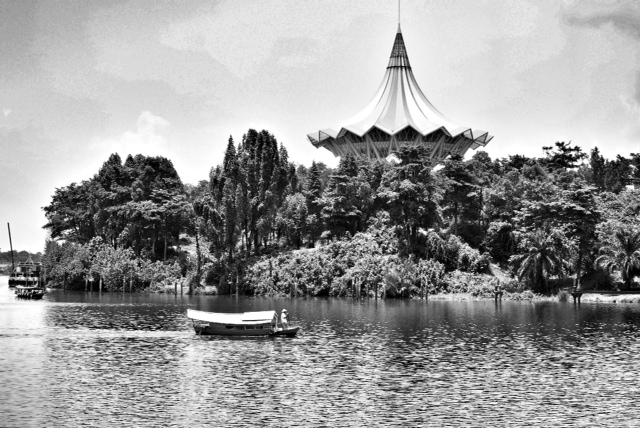 My journey to Kuching started early. Far to early at the ungodly time of 4am.

I could barely stay awake in the taxi, but at the same time I could not quite fall asleep either. This was a pattern that would repeat itself through the flight. I passed through the journey in a semi-comatose state listening to music through my headphones.

Upon arrival in Borneo a miraculous thing happened. I was one of the first off the plane, my bag was the first on the carousel, I was first through security, first at the taxi desk, and then first in the taxi queue.

Sequences like that just don’t normally happen for me.

My accommodation was the BandB Inn, and from the outside it did not look promising. Nor did things get better as I climbed the steep concrete staircase to reception. The railing alongside was amongst the filthest things that I have ever seen, with years of accumulated dirt built up on its surface.

But first appearances can be deceptive, and so it proved to be as I checked into a very pleasant room. One with by far the most comfortable bed and pillows yet.

Unfortunately, that is as positive as I can get about the place. Shortly after I checked in a terrible noise started up. Banging, grinding, drilling and sawing are the noises that I will take from my stay here as they had decided that this was to be the day that they would replace all their windows and fit new ones.

This will be lovely for any guests staying after me, but they really shouldn’t have been open for business with that amount of disruption. In my three nights there, I was woken at 7am each morning to the sound of hammering. Whenever I would pop back to the inn, the noise was deafening. I spent most of my time there wearing headphones to drown out the noise.

But one does not come to a place like Borneo to stay in a room all day.

Kuching is a lovely place. It is home to 500,000 people, but they are dispersed over a large area so it does not feel crowded. There is a wonderful waterfront area which allows you to amble calmly and enjoy the scenery.

Alongside the waterfront are many foodstalls and drinks venders. During the day many of these are closed, but by the evening they are alive with customers and lit up as though it were Christmas.

This theme continues on the roads as decorative lights are attached to many street signs.

To be honest, I really did not do to much in Kuching beyond walk the streets, view the museums and have my meals. The area I was in was compact enough to reach all I wanted to do by foot, and the landscape was pretty enough that I enjoyed the walks.

I took a sunset river cruise on the first night which was a very relaxing way to take in the surroundings, although strangely rather than concentrating on just the scenic part of the town, it also took us through the industrial area.

Boats of varying size and condition dominated the river. Large instrustrial vessels, including one with an alarming list, were moored by the banks with smaller fishing, tourist and water taxis flitting around between them. The banks were lined with houses on stilts. At first grand hotels or mansions but as we moved on the houses became more simple until they became simple tin huts.

On the decks of the homes we could see people people going about their daily lives. Sitting, chatting, cooking, washing and fishing. In one case a man had built a fire and was sat in such a way that it looked as though he was sitting right in it.

As the sun set, Kuching lit up and looked marvellous it is a very attractive town.

The other big thing that I did was to go and search out the Orangutans. This is something that I had wanted to do since I had decided to come here. In all honesty, it was the entire reason that I came to Borneo.

At first this proved to be more difficult than I expected. The tour companies and guides wouldn’t touch me simply because I was a single traveller. Place after place would happily show me the guided trips into the jungle that they offered, and then back away when they realised that I was by myself.

This was really disheartening, and frankly pissed me off. Eventually I found a place that told me they could take me to the Semenggoh Wildlife Centre, a 650 acre area of jungle that was now a protected area for the Orangs that had been injured or rescued and needed to be rehabilitated into the wild.

The centre is not as you’d expect. It is one small building housing a brief exhibit explaining the centres purpose, and three large cages containing two rescued crocodiles. One of which was missing an eye. Don’t tell Happy Gilmore.

Other than that there is just a narrow trail that takes you deeper into the jungle and eventually to a clearing where food is left for the Orangs.

I was lucky enough to spot two almost immediately. Near the entrance to the trail high in the canopy were a mother and a juvenile.

I watched as the made there way effortlessly through the trees, swinging wildly on branches that flexed with their weight. I did not see another on my walk to the feeding site.

At 3pm a ranger walked into the centre and started to throw mounds of fruit onto a platform. He let out a holler on retired. Soon their was activity in the trees. At first the only sign that something was happening was that the noise of trees moving in the distance could be heard. The tops of trees then swayed wildly.

Then I caught a flash of orange in the canopy and zeroed in on my target. It was a young male and he was moving at speed towards the platform. He descended adroitly and proceeded to grab as much as he could carry and still be able to climb. He hung by a single limb from a suspended rope, the other three containing bunches of bananas, and his mouth was comically full like he was smoking huge yellow cigars.

More activity started to happen all around us as other Orangs joined in the feast. None would stay in he platform. They would grab what they wanted and retreat back to the canopy. Then as suddenly as they came, they left. The cause for this became apparent a few moments later as a huge male appeared high above us. Like an Airbus A380 this ginormous male looked like he shouldn’t be able to move as gracefully as he did. when watching an Airbus take off, you can see it with your own eyes, but you still are amazed that it can get its frame off the ground. But here he was moving effortlessly through the trees. Every movement exact, every swing with a purpose and style. This was Ritchie, the alpha male. He is suspected to be around 50 years old and he is an awesome sight. The ranger told me that it is not at all common to see him and that I was very lucky to see not only him, but so many of the family on the same day.

Unlike the others, Ritchie did not grab and move. Why should he? This was the boss. Instead he simply sat right on the platform surrounded by the fruit and ate, and ate, and ate. Whilst all this was happening a storm had been closing in. Crackling thunder which had started in th edistance was now right on top of us. Standing there watching these amazing animals, surrounded by jungle as a storm rolled in was one of the great experiences I have had. So enthralled was I that I lost track of time, and failed to notice that the rain had started. A hand clasped my shoulder and said ’wonderful aren’t they’? I turned and saw my driver who was stood with a large umbrella. He told me that I was half an hour late, but as it was just me he’d been happy to wait, but now the rain had started we needed to leave as it may get dangerous on the trail and the road.

We made our way back along the now sodden trail and back to the van. The rain was now coming down heavily which it continued to do so for the rest of the day.

I enjoyed Kuching. I was a pleasant place. I was disappointed that I could not do some of the other jungle activities due to being a single traveller, but seeing the Orangutans meant that this will be trip I remember for a long time.