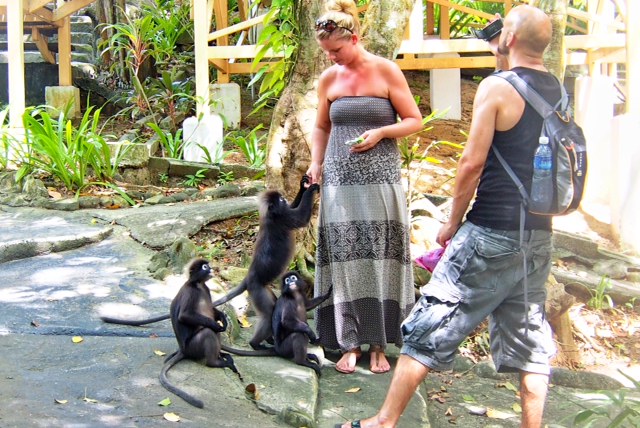 So, after a couple of days of doing nothing but hanging around and relaxing. I decided that today was the day to go out and see a bit more of the island.

I woke up this morning and left my cabin only to find a monkey cleaning to my numberplate. This was a spectacled monkey, and I have not seen these be round before. They appear to be much less common than the generic grey monkeys that we see a lot of.

The reason the monkeys were here, became very apparent as I turned a corner and saw one of the new arrivals came in last night doing the one thing the hotel has asked us not to do and that was feed the monkeys as monkeys here are wild monkeys and they have plenty of food in the forest.

I went for a swim, and played with my underwater camera. The beach, and the water are both lovely. However, the water is fairly murky because there is a lots of sand stirred up. This means that you can barely see your own seat in the water. So it is not very good for snorkelling or all that attractive to look at.

After my swim, I rented a motorbike.

Well, I say motorbike – let’s face it, it was a scooter.

I was a little worried about the bike. As the rental place did not exactly fill me with confidence. They did not appear to please, when I first of all her for there to be put into the front tire which was nearly flat. They really didn’t feel pleased when I asked for petrol to be put into the almost dry tank! But the bike itself handled fairly well on the road. The roads here are actually really fun to ride on they are nice and twisty and so you can have a lot of fun with them. I just wished I could have had my Fazer instead. I first rode to the cable cars, that have been taunting from the mountain tops above the resort.

This was a huge run the cable cars, far longer than that of the cars in Singapore. The angle at which they climb is fairly immense as well.

Slightly unusually, you can get off near the top. Here there is a viewing platform, which is well worth the time to seek out. You can then get back on the cars, and take another short journey to a higher peak.

This shorter journey, took me through the clouds. So, there was not a whole lot to see, but the experience was still fantastic.

After the cable cars, I simply rode around the island as much as I could. It is a very pretty island. Away from the main tourist areas, you get a real impression of what island life is like. There are many roadside cafes, shops, and workplaces just dotted around. Nowhere is particularly built up, and there is nothing that you could term a city or similar. Lang Kelly, is far larger than Guernsey. Yet contains fewer than half the people. This gives the ironing a lovely feeling of space, that I sometimes missed in Guernsey.

It was great to be back on a bike, I’d really missed it. It was the longest period, without riding a motorbike that I have gone through since I have my accident so many years ago. In the end, I rode from coast to coast. And of course made the same journey back. Being a little two stroke, my fingers were tingling once I eventually got off the bike as the vibrations had taken a toll after a couple of hours riding.

One thought on “Just another Tuesday”