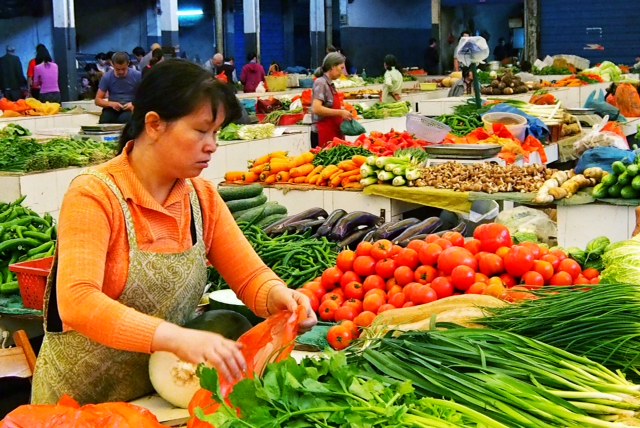 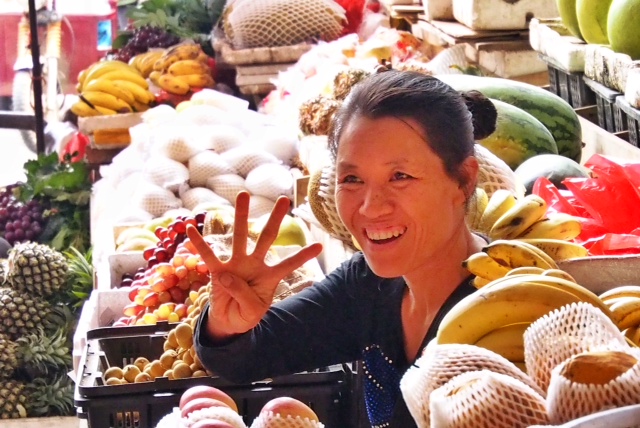 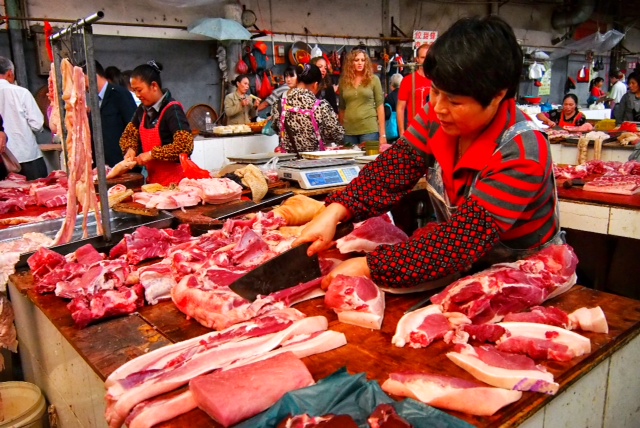 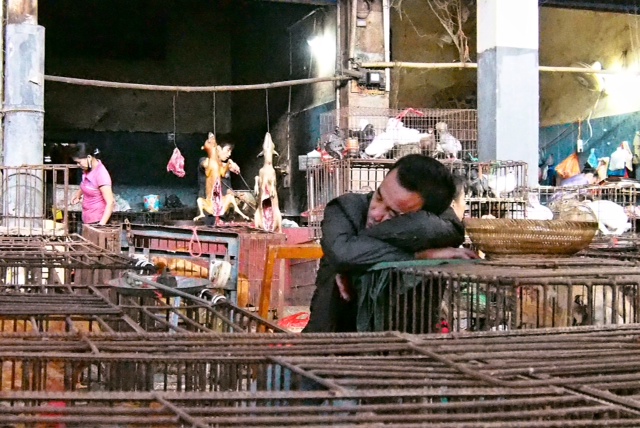 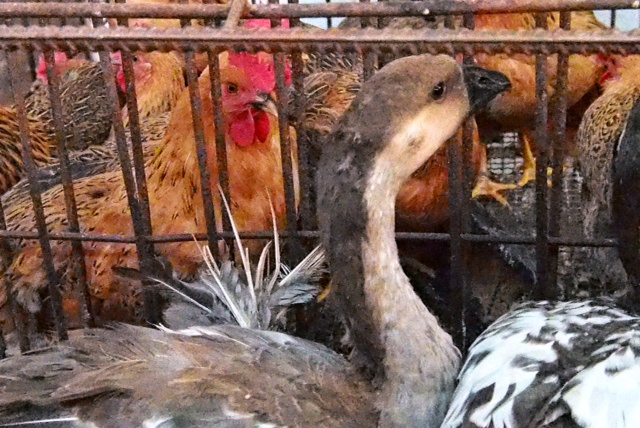 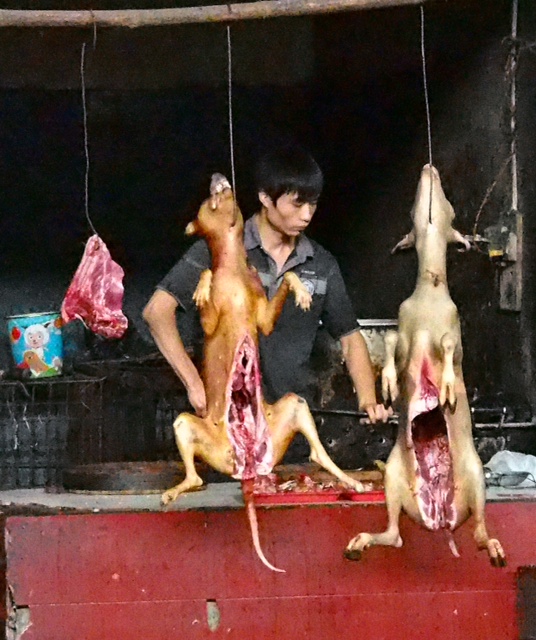 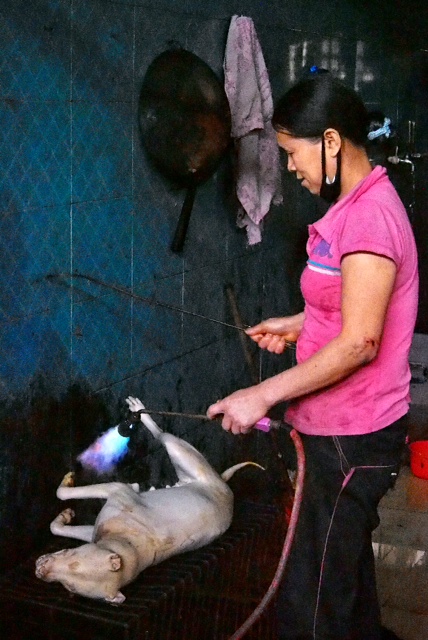 Graphic Content Warning This post contains images of animals in inhumane conditions that you may find disturbing. If you do not wish to see these, please visit Part 2 in which I focus only on the cooking school itself.

Before we went to the cooking school itself we first headed to a local market to collect ingredients for the dishes that we would be making.

The market was divided into two sections – produce and meat. The first that we visited was the produce section.

This was filled with an explosion of colour and an assortment of aromas that were much more pleasant then the usual bouquet that I have come to associate with China.

Amongst the usual vegetable suspects of cabbage, carrots and tomatoes lay exotic fruit and veg of all shapes and sizes. Some I had come to recognise during my time here, such as lotus root, but others still remain a mystery to me.

We then passed through into the meat market.

Here our teacher warned us that we would likely see animals being slaughtered and advised that anyone that did not not want to see this would be best to stick to the left of the hall.

In a previous trip to Morocco I had attended a similar class and watched as the chickens that we were to eat that night were slaughtered and prepared for cooking. I recall that whilst a little grisly, it was done quickly and efficiently. I’ve also worked as a fishmonger, occasionally helping out with the next door butcher and so the prospect of seeing this did not really faze me. The first part of the hall could easily be mistaken for any meat market in the world.

Cuts of meat lay on trestle tables ready for purchase, whilst larger cuts lay awaiting preparation. Customers drift between the tables inspecting the cuts and chatting with the butchers and each other.

It is only when you reach the livestock that things take a significant turn for the worse.

The first thing that I saw were the frogs. These are sold by the bag. Live frogs are packed into small bags, often with four or five others. These bags are then sealed and put on display. The frogs will occasionally try to jump and cause the bags to fall of the table, after which a vendor will pick up the bag and lazily lob it through the air and back onto the table.

Moving on wee come to the chickens. These are kept in small cages that are rammed with other chickens and stacked to head height and twice as deep. Literally hundreds of chickens stored in tens of cages. Pigeons suffer a similar fate, as do other small poultry birds like ducks.

The first sight that truly disgusted me were the geese.

These were kept in the same type of cage as the other birds but in fewer numbers due to their size. However, the major difference was that the wings had been torn off of each and every goose. Unfortunately I do mean torn off. Each gooses flank sported an assortment of protruding bones snapped and broken from where the wings had been ripped apart.

Surprisingly all the stall holders had not minded photos being taken, either totally ignoring us, or occasionally posing for the camera. One woman in the produce market had been worried that I’d take a photo of her eating sweetcorn on the cob and we laughed as she pantomimed diving under her stall and I pretended that I was trying to catch her in the act in some kind of anglo-sino peakaboo. The stall holder selling the geese saw me looking at the bloody stumps and angrily shouted for me to move away, wildly gesticulating that I should leave.

Then someone noticed the dog carcass.

This had been skinned and hung next to a small goat, Both animals had been gutted and hung by hooks through the throat. I could not take my eyes off of the dog as its position was reminiscent of play, as though it was laying on its back wanting its tummy tickled.

Beside the hanging dog, another lay on a slab. We watched fascinated as a woman then emerged, lit a blow torch and began to roast the dog. She shouted at us angrily to move away but no-one could take their eyes off of the spectacle.

Strangely I was not that revolted by the sight. The dog was simply another dead animal that was destined to end up on a plate sometime before. It was meat, not something that I would personally eat, but then I have not been raised in this culture where this was likely an everyday sight.

Indeed it was the condition of the animals that were yet to be slaughtered that were the source of my revulsion. For me, eating meat is a normal thing. I’m not blind to the fact that an animal dies in order to provide that meat. But I am of the opinion that we should at least ensure that we are not unnecessarily cruel to the animal whilst it is alive. This market was the antithesis of this. The animals were kept in squalid conditions, limbs broken, thrown around jammed so tightly into cages that some would be suspended upside down.

There seemed to be one exception to this – the rabbits.

I do not know if it was simply the way that this one stall holder does things, or if it is the way that these particular animals are kept but they were in pristine condition.

The still sat in steel cages, but only in small numbers. Take away the surroundings of the market, and you could envision this to be the West Show as they looked immaculate. The fur was clean and looked brushed. They looked exactly like they were for sale in a pet shop waiting to go home to loving owners for £30 each, rather than to a cooking pot for pennies. Maybe its because I own a rabbit that this jumped out at me, but I think it was more that every other animal was dirty with feathers etc missing and they looked like animals destined for food, whereas these rabbits looked so clean in comparison that it was difficult to resolve they were to have the same fate.

Other then my distaste at the conditions, nothing had really surprised me or left a lingering image. This was a large butchery and I knew there would be unpleasant images. I also knew that I was in rural China and conditions were going to be far from perfect, and so the experiance was pretty much what I had expected.

That is of course when you end up seeing something that does stay with you.

Just before leaving I went back to the dog stall to see if the woman was still there. In my fascination with the dog on the slab I had missed something. Something that now grabbed my attention and throttled it.

I had missed the cage with the live dogs at the back of the stall.

In a small cage sat four or five dogs. Most of these had curled up and were laying on each other. But one dog was sat up and was looking directly at me.

All the other images in that place are now pretty much limited to the photographs that I took, because when I close my eyes and think of that market is the face of a ragged little dog staring directly at me that I see in my minds eye.