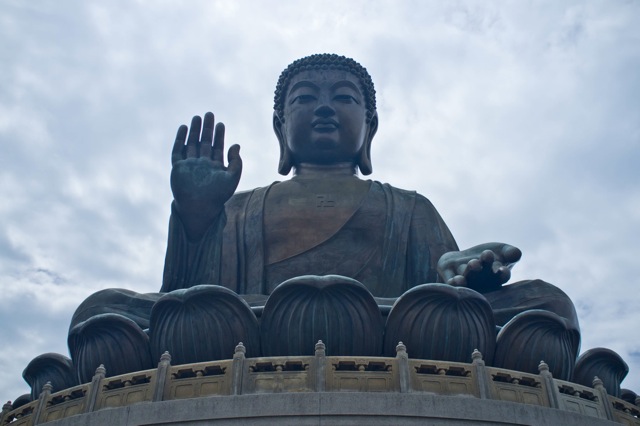 Normally when I go on one of these trips, the beds in my hotel tend to have one thing in common – mattresses that are so soft that they could be folded in two with a single hand. My mattress here is the exact opposite, to call it firm would be a disservice to firmness.

It has only marginally more give than solid concrete, barely denting with my entire bodyweight on it. That suits me just fine as it reminds me of my old Japanese style futon, only more comfortable.

Waking early, my body was screaming that it should not be up yet as it is still on UK time and thus ready for bed not getting up.

I met with a tour group to go to Lantau Island, first meeting at the Avenue of Stars in Kowloon. Just like the Hollywood walk of fame, this was made up of handprints set into the path, and in this case dominated by Jackie Chan. However, my own interest was centered on the skyline of Hong Kong Island across the water .

We then headed to a place that bored the hell out of me, a jewelry manufacturer that wasn’t in the script but was ‘added value’. The only thing it really added to was the weight of my boredom threshold.

There was a group of Australian woman on the tour who were to put it simply ghastly. They were exactly the sort of people that you don’t want representing your nationality when abroad, something re-enforced by another Aussie couple who were at pains to point out that they weren’t all like that. So what made them so ghastly? Well it could have been that they were the loudest people around, continuingly talking over the guide (and she had a microphone), were consistently late at every stop, the delight they took in their ignorance or the barely disguised racism sprouting from their wide open, overfed mouths. But what I think really topped it of was the 45 minute discussion conducted in loud clear voices about their menstrual cycles. They shared with the bus every conceivable detail… everything. My honest thought was that despite the tour being conducted in English, they saw all the Asian faces and assumed that no-one could understand what they were talking about.

After the coach journey we arrived at the station for the Ngong Ping 360 cable car. A 25 minute ride up the mountain to the landing centre and the Tian Tan Buddha. This was something that I had been looking forward to ever since booking the trip.

I’d paid a little extra so that I could get a glass bottomed gondola, and it did not disappoint. The view proving spectacular, even covered in the mid morning mist. The first glance of the Buddha is breathtaking, with him appearing from around the mountain. The shear size causing it to stand out on the landscape even from some distance away.

I made my way to the Buddha, and paid my respects. After all, despite being a tourist attraction it was still a religious site, which is why is was quite galling to watch the Aussies trying to climb the surrounding statues to get a better view of the area.

Lunch was eaten nearby. A vegetarian feast, starting with some mushroom and sweetcorn soup, which when finished the bowl became the dish for the foot. Beautifully spiced and stir-fried veg came out, peppers, onions, rice, spring rolls. All delicious with the one exception. I’m afraid no matter how much I try, I’m just not going to be able to develop a taste for bean curd.

The Aussies, instead of tucking in decided instead to complain loudly about the lack of meat and western cutlery. Knives and forks were produced for them, and I as the only other westerner nearby was offered some as well. Great I thought, now they think I’m with them. By this point I couldn’t be more fed up of them if I tried so I made my way to the Po Lin Monastery.

The temple is a beautiful building and looks amazing decorated with intricate carvings and painted in green, red and gold. The air was heavy with incense, and it immediately felt peaceful as the few other visitors made their way around.

“Fuck it smells in here”, Yeah, fucking pongs”. I didn’t even need to look to know who it was. I just sat and tried to pretend that they weren’t there. I barely even flinched as I heard the loud ‘blong’ noise where of the number had just kicked over a bronze container on the floor. “well it’s a fucking stupid place to leave it…” is what I heard on the way out.

A monk smiled at me and said that whilst not visitors are peaceful or respectful they do bring money which will be used to maintain the monastery and build others with can help them take Buddhism to newer places, so all are still welcome. It was really at that moment that I knew I’d never be able to be as tolerant as that monk is. He was taken it in stride, even though it was his home. I felt ashamed for the lack of respect shown.

Next we made our way down to a small fishing village where the houses were on stilts. This was obviously a working village with everyone hard at work sorting, drying or selling their catches. I went for a walk with our guide who said she would show me a good spot to get photos of the stilts. We chatted briefly about her job, and that she enjoyed it very much and she got to see people that were happy because they were on holiday and not sad because they were working.

We walked back slowly through the village in the now blazing sunshine, Jolie now using her umbrella as a parasol. She told me I should buy one and always keep it with me. A kind of Hong Kong Hitchhikers towel if you like.

Near the entrance to the village we heard a commotion. The two of the largest and loudest Aussies were haranguing a storekeeper calling her disgusting, sick and more names along those lines. What had provoked this? An attempted rip off on a transaction, name calling, theft? No. It was far more stupid.

We were informed that the villagers kept their livestock in the front of the stalls. This was true, as each building had lots of produce outside. Mainly dried fish. But some of these were selling live fish, or shellfish. It was outside one of these that the commotion was taking place. But what was different about this stall?

Laying beside the was a large dog, some sort of mongrel but about the size of a great dane. It lay on the ground, sunning itself. He wore a collar and a name tag, and he was tied to the stall by a length of rope. A half drank bucket of water near his head, and I was amused to note a huge bag of Pedigree Chum tucked under the stalls trellis.

Our heroes thought process was thus.

All the food is on the trellis

The dog is alive

The dog is tied to the trellis

The dog is to be sold for food

Jolie calmed everything down explaining the obvious that the dog was not livestock but a pet.

I wanted to cry.

My last stop was to head back down the mountain in the cable car. This time it was even better as the sun had burned away the mist and I could see for miles. I could see fishermen wading in the water below, and an amazing view of the airport where the planes were taking off and landing parallel to us.

In all a really pleasant day made all the more pleasurable but knowing I never have to see the Aussies again.