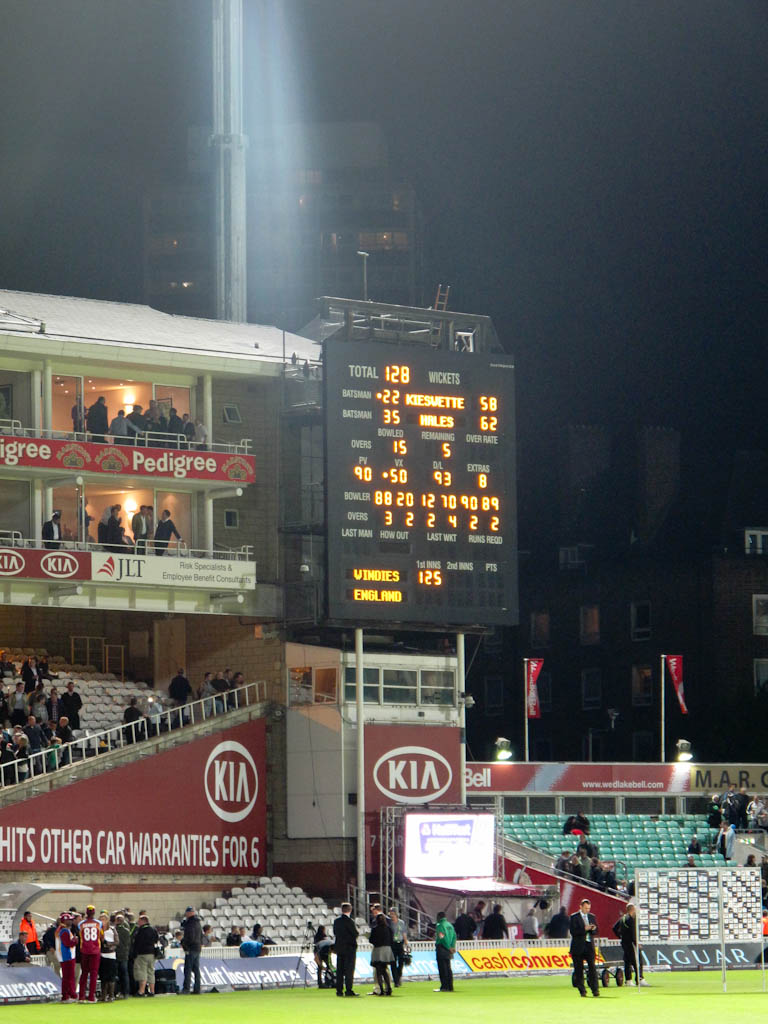 It has been a while, but once again I’m off on an adventure. This time I’m going to Hong Kong. I’ll be departing these isles tomorrow morning, but in the meantime I’ve had a day in London.

In truth, I’ve been feeling pretty rough recently so actually spent this afternoon lying on my hotel bed trying to regain a little energy. Then this evening I headed off to one of the worlds most famous sporting venues to watch England play the West Indies.

Heading to the Oval was one of the more unpleasant journeys that I have undertaken as the tube was busier than I’ve ever seen it. At one point we were so jammed into the carriage that no-one needed to hold onto any railings as we simply couldn’t move. Then just as the doors closed a small woman jumped onto the train, and nestled into the tiniest gap between myself and the doors.  So jammed in was she, that when we arrived at the next station the doors opening almost caused her to fall out as she had been pressed against them.

What amazes me in these situations is that despite people being crushed, others will still stand in the middle of the crush with newspapers unfolded and held at arms length, casting evil glances at anyone who may get pushed through no fault of their own into the paper.

The atmosphere outside the Oval was more akin to a carnival, with the street sellers hawking horns, whistles and flags to the visitors, drums could also be heard coming from the stadium.

Entering the stadium the senses were assaulted by a myriad of smells emanating from the copious food sellers, the noise of the West Indies fans and the colours of shirts and flags.

I made my way to my seat and was pleasantly surprised just how much legroom there was. After a flight, a train journey and the packed tube, this was actually the first time I could stretch my legs all day.

In many ways the crowd reminded me of the baseball match that I saw in America. People regularly leaving seats to get food and drinks, chatting amongst themselves and of course watching the game.

What I’d not really expected to see were the fireworks, cheerleaders and breakdancers that appeared on podiums after each 4 or 6, or blasts of Lady Gaga between overs. It made for a great atmosphere, but I couldn’t imagine it at a test match.

The game was enjoyable, but after the people behind me came back to their seats with the most delicious smelling food, my stomach got the better of me and  I went out back to get something. The sheer variety of choice was overwhelming. Pizza, burgers, jerked chicken, halal, fish and chips – pretty much anything you can think of. I eventually chose a Cornish Pasty sold from a converted VW bus, with a surfboard on the roof.

Piping hot pasty in hand, together with a pint; I made my way back to my seat to see England obliterate the middle order and tail. Munching away it occurred to me just how pleasant an evening this was.

As the match wore on, it became obvious that the Windies attack was having no effect on the England openers, and that it would be just a matter of time before England hit the required target.

This they did in style, wrapping up a ten wicket win with ease. All in all this was a great way to start my latest trip and will likely prove far more enjoyable then the 16 hours of flights that I have coming up later this morning.