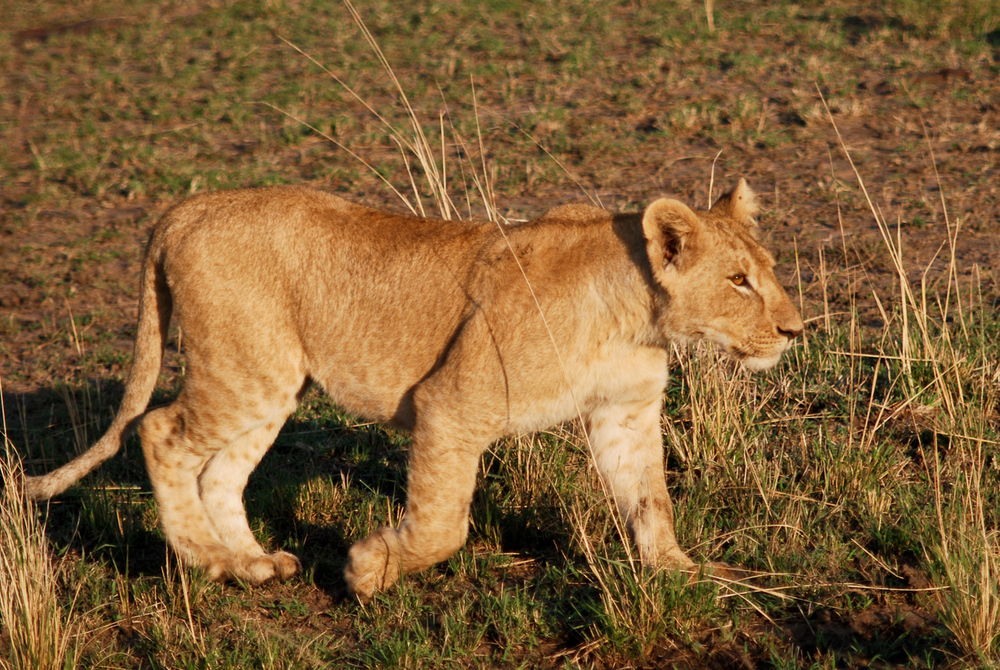 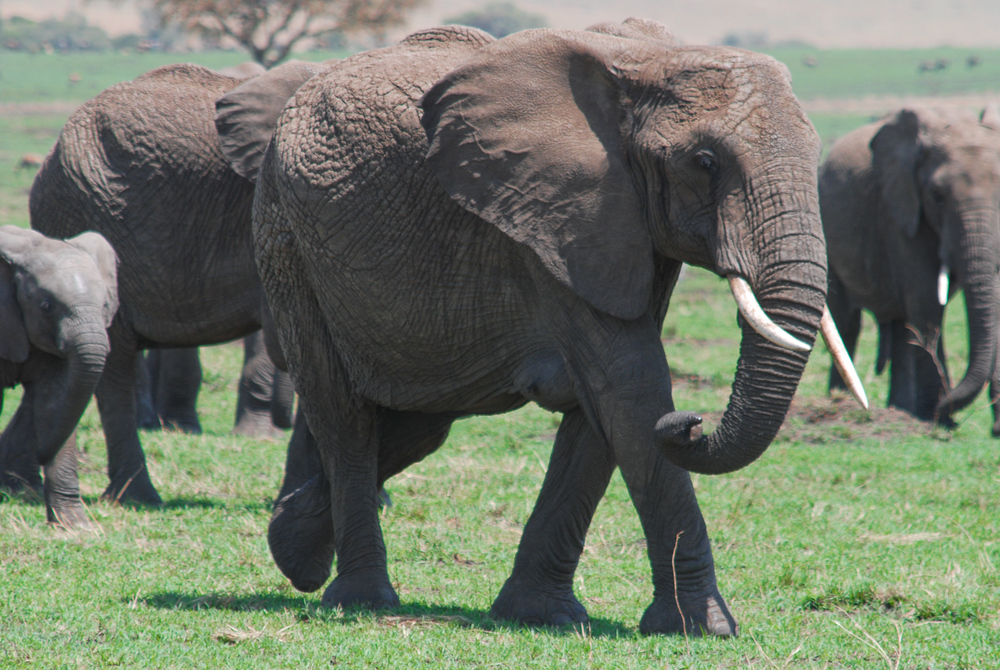 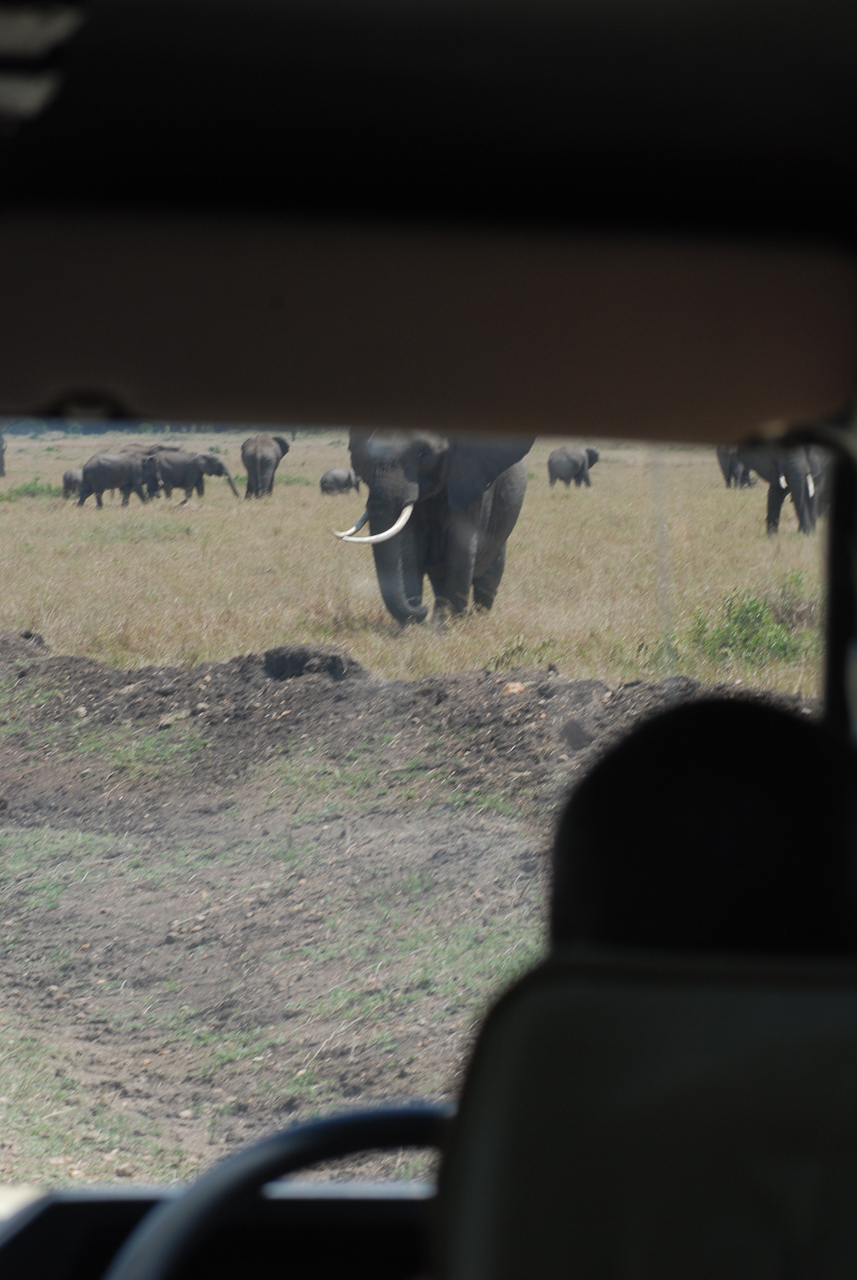 We are now back in Nairobi having driven down from the Mara this morning. Before leaving we had our last game drive and another 6am start.

Out in the park we again spotted the pride of lions relaxing and playing near where the wildebeest were still crossing the river. Occasionally the Oder female would sit bolt upright and then go into a hunting position when a wildebeest came a little too close. The older cubs started coming much closer to us then before, coming to play in the sun out of the long grass where they normally reside.

The main female, the one what we saw chased off yesterday, moved and sat right in front of the point where the wildebeest emerge from the river. She sat there for ages, occasionally barking out orders and we would see the cubs take flanking positions. The only thing missing were the wildebeest; who inspire of their extreme stupidity would not cross the river with the lions so close. Eventually the lioness started to get frustrated and started roaring in long guttural bursts. The park rangers came over and told us to move on so that we did not aggravate her further.

We returned to the lodge having concentrated nearly all the game drive on the lions. They may not have hunted, but they were fascinating all the same.
After checking out and having breakfast it was time to leave. But before setting out on the road to Nairobi, we asked James if he could take the ‘long’ way out of the park, turning it into a mini game drive. He agreed and we were well rewarded with some great spots.

We came across a herd of elephants, this time complete with a baby and several juveniles. Parking up we watched them walk towards us from a distance. They came across the track directly in front of us, just a few feet away. As they began to put some distance between us, one of the big males suddenly focused his attention right on us. He spread his ears making himself appear even larger then before. His head and trunk began to sway from side to side as he broke into a trot.

The elephant had decided to charge at us.

More worryingly the he elephant had decided to charge at us whilst we had the engine turned off, the driver was looking in the opposite direction and on his mobile phone.

We shouted warnings to James and he realised what was happening and quickly got us out of there. We were then on our way out of the park when We got word that another cheetah had been spotted close by. We tracked it down and it became part of a beautiful symmetry as the cheetah became both the first and last of the rarer animals that we saw on our drives.

The drive to Nairobi was fairly uneventful, except for a run in with a seriously dangerous driver whilst on the escapement pass. This was a very steep road and the large trucks and busses could only go at walking pace. This guy would try overtaking then on tight blind corners, nearly causing an accident each time. We eventually got stuck behind I’m, and on particularly slow park, he actually started rolling back down the hill towards us. When we eventually overtook we had to take a look at this guy. We stared into the windscreen and were met with the biggest pair of stoners eyes. The guy was obviously high as a kite, but still driving his car. What a muppet.
It took about 8 hours to drive from the Mara to Nairobi. It then took around another 90 minutes to get through traffic to our hotel. Traffic in Nairobi is like Marrakech scaled to new hights. It comes in every direction. Traffic lights are a suggestion, not a control scheme and there are lots of roundabouts. The difference between these and the ones back home, is that no one sticks to a lane, an exit or indicates. Right of way may be something they’ve heard of…. But I’d be surprised.

We will be meeting Jaquies cousin, Kui later for a drink or two. She had hoped to join us in the Mara but was unable to make it and so is going to join us for the rest of the trip. Its only been a couple of hours, but I’m missing the Mara already. The peace and the wide open spaces are completely at odds with the city, and I know which I prefer.