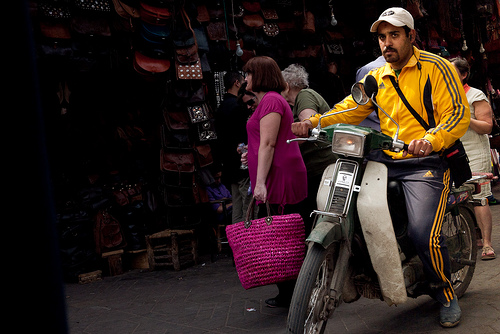 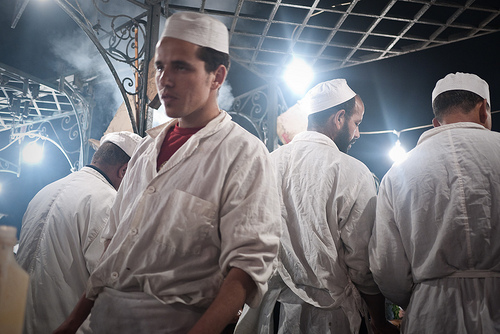 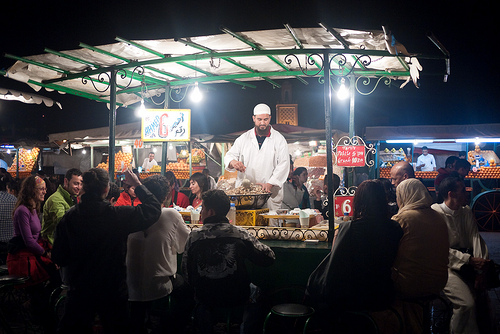 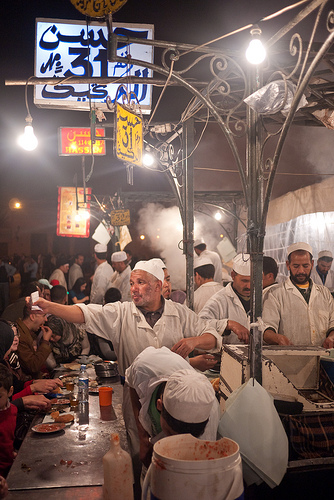 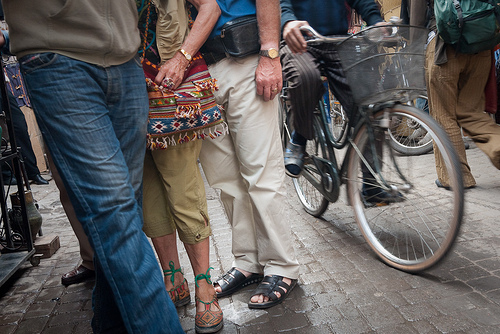 So I’m currently flying at around 35,000 feet on my way back home from Marrakech and typing on my iPhone.

The last two days have been a bit of a blur. Marrakech is a city unlike any that I visited before.

As a group we went for another brief walk through the souk to allow us to get our bearings. The streets were just as hectic as the day before and I could feel myself becoming really stressed and uptight.

We were to have a session with Jon or Mike to discuss ideas. I was up first and Jon had an idea of a style that I could shoot. We went out for a walk and Jon demonstrated street photography. With my camera being so small we could position it discreetly around waist level and try to capture street life as it happened. It was a whole new style to me and using it seemed to break all of the rules that I’d spent the last week learning. Composition ranged from tricky to impossible. Pointing in a rough direction and shooting from the hip. The strike rate for this kind of photography is very low. Probably less the one in a hundred are interesting. Less then that again for good ones.

I found it interesting but difficult. I didn’t produce anything that I would be  happy to present. I wondered the souk for a couple of hours, but had reached my breaking point. Rude shopkeepers, insane motorists. Tourists stopping randomly when walking behind them. It all added up to one huge headache, and there was no way that I was going to get any decent images while I was wound up so tight. I had a series of images that I was happy to present taken whilst we were cooking with Zora. With this in mind I decided to retire to the Riad and just relax for the remainder of the day. Making my way back I was approached by a man with a monkey on a chain. He introduced himself and grabbed at my hand as if to shake it. the second that he did this the monkey ran up his legs, down his arm, and perched on my shoulder. Still holding firmly onto my hand the guy asked for money in return for a photo. Having been told that the best way to handle this is to not even engage in dialogue. Instead, I looked at his and asked him to kindly remove his monkey from my shoulder. Rather then doing so, he attempted to haggle for a price. I just turned on my heel and started to walk away; monkey still firmly attached. It took a couple of seconds for the guy to realise that I was not stopping and he ran after me shouting for the monkey to come back. He then caught up with me and demanded money for having had the monkey on my shoulder. In my most sincere voice and with a straight face I told him that he wasn’t getting anything. Rounding the corner and out of sight I creased up laughing at the comedy of it all. After Hassans attempted robbery, the prospect of shopkeepers hassling me for money now amuses me. Finally returning to the raid I found that a couple of people had the same idea and spent the rest of the day chatting in the afternoon sun.

For the evening meal, Jon had planned something different. We were to go back to the main square. In the evening this gets converted to a huge food market. Stalls containing portable kitchens and with benches attached are everywhere that I can see. So many portable restaurants, each throwing out an assortment of smells and sounds. People were throwing menus at us from every direction in the hope that we would choose to eat at their restaurant. We split into three groups at this point – veggie, fish and meat. Jon, Drew, Juliette and myself made up the meat group and Jon lead us to one particularly packed kitchen. This one was frequented solely by locals and queues formed alongside it. As soon as one patron had finished, another jumped in their place.

I was living in one of my worst nightmares – a huge crowd, all tightly packed in together. Jostling, shouting and all in rush. I could feel the panic rising in me as we waited. Every second the urge to escape grew stronger. it would have been easy just to walk away but I just about managed to keep my composure and then a gap opened up and we took our seats. Just as quickly as the panic came, it went. Pieces of paper served as place mats. A large bread bap in each place. A sauce similar to Moroccan salad was poured into flat metal saucers and then chilli sauce was mixed in. Jon made the order, a plate of small spicy sausages was placed before us. Tearing of chunks of bread, we wrapped the sausages and dipped into the sauce. They were very good indeed. Another dish was brought to us. Jon just called it chicken. Again it tasted excellent with the bread and chilli sauce. Asking Juliette if she was enjoying the meat and getting a positive reply, Jon then told us it was fried chicken livers. Juliette lost her appetite soon after to Drew’s benefit as he simply made a hole in his bap and poured the rest in making a large sandwich – good man.

We then met up with the others and it turns out that there had been a fight at the fish groups canteen. Apparently someone had taken umbrage at having a photograph taken and had reared up. Another man had tried to calm him down, but the two came to blows. The group then got caught in the middle of it all and had to escape through the kitchen. A couple of people were a little shaken by the experience, but no-one was hurt. By this time we all could have used a nice alcoholic beverage. Were to make our way to one of the posher hotels in the new town. Jon gave us the choice of a 10 minute walk, or catching a taxi. We chose the walk, which turned out to be longer then 10 minutes, but then a few of up did stop to take photos o the Minaret which was illuminated for the night. Crossing main roads in Marrakech is an adventure in itself. No one stops, they just speed around you. Someone compared it to a game of frogger. They were absolutely correct. We arrived at the hotel bar, but may as well have arrived at a different planet. This place was new, clean , modern and had an air of expense about it. A large staircase house musicians and the bar also played host to belly dancers. we sat out in the courtyard, much quieter and nicer in the cool night air. The cost of a single cocktail here was about the same as the ‘meat group’ had paid for all our meals combined. But after the hustle and bustle of the market it was great just to sink into a sofa with a mojito and chill out.

The following morning I headed out with Joan as we worked on our assignments. Joan was working on shooting reflections in mirrors and I was going to work on shooting from the hip again. Being with Joan gave me the perfect excuse to stand around in the busy streets. As she worked talking to shopkeepers and then photographing their wares, I could stand around looking as though I was just waiting for her, but in fact shooting discreetly. I did however get spotted by one man. He came over and demanded to see the photo I had just taken. Upon showing him he said that if I wanted to take his picture I should ask. Just one problem their – I wasn’t taking his picture. He just so happened to be in the shot, rather then me deliberately taking a shot of him. Another shopkeeper smoothed things over, saying that I could take whatever photos I liked and if the other guy didn’t like it then “he can eat the Sahara and go to hell”. Rather then provoke anything, I just put the camera away for until we moved on. Rather brilliantly the man that had taken offence then approached pretty much everyone he saw with a camera and asking if they wanted to take his photo. It was just his way of proving a point and I found it hysterical. He’d occasionally look over to me after posing and give me the thumbs up. I just had to laugh at the the wonderful absurdity of it all.

We worked for a few hours before returning to the riad. I’d pretty much decided that I would be presenting the cookery pictures and would just give a cursory look at the street photos I’d shot in the morning. Mike came and sat with me, looked and the pictures and then asked to look at the street photos. He then said that I’d easily got six photos in that morning that I could present and they’d have more impact because no-one else would have shared the experience, unlike the cooking. Whilst the cooking pictures were fine, it would be more adventurous to present the street shots. This then guaranteed me a stressful afternoon as I tried to prune down the images to just six. Still being completely new to the genre, I found it very difficult to determine what constituted a good shot. I made my selection and showed them to Mike who liked totally different shots to those I’d chosen. Eventually, handed the computer to Mike as he wanted to borrow it to edit some of the groups photos for the nights presentation. This meant that I’d no idea what shots of mine would be shown in the evening. Heading to the rooftop, I met up with the others that had found themselves in a similar situation. the normal revelry somewhat tempered by self inflicted stress and pressure.

Around 8pm we were invited to the rooftop where tables had been laid out for our final meal together. Glasses and jars of all shapes and sizes covered the surface; each containing a tea light. A projector had been placed in one of the windows and this was now projecting all our photos onto the opposite wall. We each grabbed a glass of champagne or wine and stood to view the images. It was facsenating to see the differing styles and how we had all came up with such varied themes. From portraits and documentary, to the slightly abstract. It was just a really good example of how we all see our surroundings differently. It was fantastic to see how much people had improved in just 10 days. From having never taken a camera off of its automatic settings to (in Drews case) spending a day with snake charmers and getting some great shots. We then sat down for dinner which was chicken served from an enormous tajine – well what else could it have been. Strangely the critique and judging that we had all been getting anxious about never occurred. Instead we ate our meal and proceeded to drink lots of wine. As time passed people left for their beds, but a few of us stayed on having the sort of conversation that only alcohol can provide. Many laughs were shared, a few eyebrows raised and maybe just a little bit of innocence shattered. All in all a most entertaining evening.