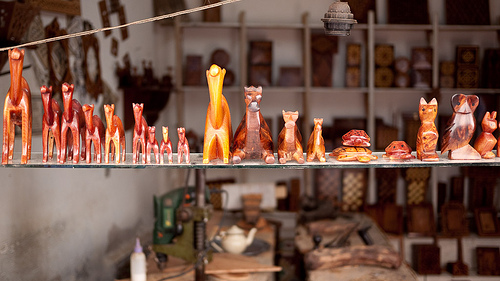 Lessons this morning consisted of critiquing our shots from the previous days exercise. The shots were quite varied broaching quite an array of subject. My shots were not savaged quite as much as I expected. I submitted three shots. One of some carved animals in a shop window.

A man passing through one of the gates to the medina.

A ‘safe’ shot of boats in the fishing harbour with a keep in the background. This shot I was not particularly happy with, but though it suited the brief more then some of the shots that I do like.

We were then handed the next brief – to shoot a cover of a book set in Morocco named the Spider’s House. We were given an extract of the book to read and then to think of an angle and the kind of shots that we wanted to get. My immediate impression was that the subject of the book was isolated and feeling quite desperate. He wanted to run away and I wanted to reflect that. I had two concepts in mind – one to have a person walking through through light – momentarily leaving his dark life and into the light. The second was to take shots from an elevated position, with the intention of trying to isolated a person in a crowd. Jon suggested that I try and find someone standing on their own and using a slower shutter speed to create some motion blur around the subject further deepening that sense of isolation.

I went out in to the Mediana with Laura, just walking around trying to find location to shoot our ideas. I eventually found an arch that came close to what I was envisioning. I placed some rose petals on the floor and waited for the right person to come along. This took far longer then expected. People walked in groups, or were French tourists or simply did not come down the street at all. Eventually a man came down that was perfect – he had the exact dress and look that I wanted. But he spotted the camera and deliberately walked out of the shot. Gutted. I did get a shot similar to that which I planned, and was pretty pleased with it. I was to have my first 1-on-1 session later with Jon so I headed back to the hotel for that. We talked about my style of shooting, and what style he saw me shooting in. What he suggested came as a bit of a surprise as its not a genre that I’ve done much of.

The biggest obstacle that I have is simply approaching people in the street. I don’t yet have the confidence to just approach someone, talk to them and then take pictures. I have resolved that I will do this at least once before the end of the week.

After my session with Jon, I went to the roof of the hotel to try and shoot my second idea. This was not so successful. I could not get a decent angle into the street. It was an interesting excerise from a technical point of view, but not suited to the brief. I’d like to try and get the shot again, if I can find the right location. The problem is finding somewhere that I can get the elevation.

We ended the day heading off to a restaurant called Scirocco. I and a few other ordered couscous. When the portions came they were laughably large. Bigger then most of the portions that I had in America and they were huge! No one even came close to eating a quarter of the food available – let alone a plate. We could easily have ordered just two dishes and fed all of us. I felt sorry for Claudia. Jon had told us that the restaurant served an excellent chocolate cake. She skipped a starter so that she could have one, but after the main just couldn’t face it. Jon ordered a single slice and eleven spoons. The plate being passed amongst us so that we each got a bite.