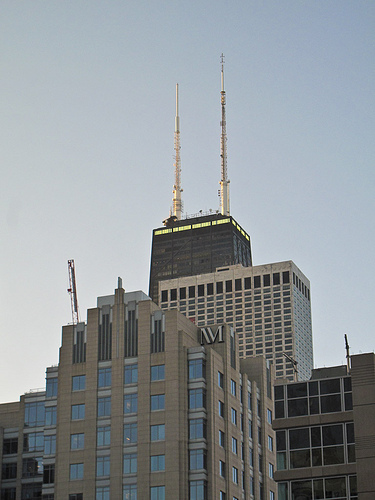 Chicago. Wow what a city. Quite honestly if I had to move to America I would choose Chicago to live in.

Chicago was actually the place that I had least looked forward to visiting. I did not have a clue what I want to do once I got there. Instead it turned out to be the city in which I saw a thousand things that I wanted to do, but just didn’t have time to do.

The city itself made the worst possible first impression going. The rail trip in left me exhausted as I had barely any sleep on the train. I’ve heard any number of complaints about the ‘beds’ in the cabins. They really weren’t that bad. I was 90% comfortable. My only complaint a badly placed grab handle that overhung the bed making any movement painful. Baring in mind that I’m a bloody big guy, yet I was comfortable. The final leg passed major industrial works and scrap yards. Smoke and steam came from every direction and heavy plants were all the eye could see.

As soon as we arrived in Chicago station. I was bundled on a tour bus for a trip around the city. One that was focused on prohibition gangland Chicago. The guide, a fantastically mustachioed Hawaiian shirted man, with a sense of humour an a parallel with my own was by for the best I’ve had yet. Genuinely knowledgeable, humourus and above all passionate about his home. Unfortunately many of the places we visited have been torn down. But such was the imagery painted by the guide that I could practically see Al Capone his authority over a street. As strange as it sounds, chicago seemed the closest match to Guernsey I have been to yet. In fact it was the Guernsey I wish for. The city has a coastline created by the great lakes. Therefore the summer climate was very much like home. Of course this changes drastically in the winter with major snowfall, Chicago people have two major things in common with us Sarnians. We both love sprt and we both have a love of the dreaded alcohol.

As we went around the city I saw a million and one things that I wanted to see and do. Unfortunately, I had but a single night and could not even scratch the surface of this city.

I first went for a walk around the city. Quite unintentionally. The map that the hotel had supplied me was totally incorrect. I tried to find a place called the Contemporary Museum of Photography. Following the directions given to me by the hotel, I walked for an hour, turned a corner and find myself staring at the rear entrance to the hotel! I have honestly no idea how I ended up there. All I can say is the directions were like a maze. Having walked for an hour and ended up exactly where I started, I did what any sane person would – I jumped into a cab. I handed the cabbie the map and pointed where I wanted to go to – I was informed my map was shit but he knew where I wanted to go. I was dropped off an embarrassingly short number of blocks later at the museum of contemporary art.

Now I love art and my tastes are fairly broad. I’ve never come away from a gallery with my opinion dived as much as it was here. Some of the exhibits were quite frankly shit. A table cloth with a burn in it. Some overexposed photos of a sea and horizon, and a couple of paintings. One thing I found was the more outlandish the artists explanation of the work is, the shitter the work was. There were a few pieces that I loved, and I’ll admit to to doing the stereotypical pretentious thing of staring at a wall for 10 minutes wondering what the artist was conveying. Like a lot of things it made me wish that there were similar exhibits in Guernsey.

After that I went to do something where the exhibits were more universally accepted – the Aquarium. I saw Beluga whales, dolphins, Penguins and Alaskan Otters. I got chatting to a guide about how the oldest otter was a complete attention whore, and learnt that she was a survivour of the Exon Valdeeze disaster and hand birthed most of the otters in the aquarium. I also learned that otters are part of the ferret family. A group that also contains the Wolverine. Unfortunately our conversation had to be cut short as some ghastly woman was demanding to know why her brat had been scolded for banging on the glass. After all junior was just expressing himself. I thanked the guide for a genuinely interesting conversation. I now have a knowledge of the otter family and how their relations fare with the changes in the environment that has made me want to find out more. As I was told, the guide was delighted to talk ‘shop’ but he now had to deal with what her called the ‘other part of the job’.

I went exploring for somewhere to eat a meal. In the end my choice was decided by something other then my stomach. I had bought some lager called ‘Land Shark’.The only problem being that the bottles had a pry off cap rather then the normal American screw off. I went to a restaurant called the ESPNZone. Primarily as it had a gift shop in the lobby. A gift shop that happened to sell bottle openers. The restaurant itself was brilliant. the kind of place that I would have spent a fortune at in Guernsey.I was show to what was quite literally a seat. In this case a Laz-E-Boy recliner. This happened to be situated in front of a giant cinema sized screen showing that nights baseball, surrounded by 42” screens showing all other sports channels that ESPN broadcast. The seat had a back massager and a footrest. My food order was taken alongside my drinks order. I asked for a decent local beer and was asked if I would like a pint or a tall. A tall as it turns out is a huge mug, that holds about 1.5 liters of beer. When full and reclined in a chair it is surprisingly difficult to lift and drink from. The food was adequate, but the service was excellent. My waitress asked if I would be having another beer when I was around halfway through my monster drink. Of course I would be, but not just yet. She then asked at what point would I like another beer – indicating a level on the glass with her pen. As soon as my drink got to that level then she appeared with a another monster glass. After being on the train for so long it was wonderful to be so relaxed and comfortable. My waitress got a rather good tip that night.

It was then back to the hotel to rest before catching the stupidly early train to Denver – and my 2nd time zone in three days, or 8th in a week.